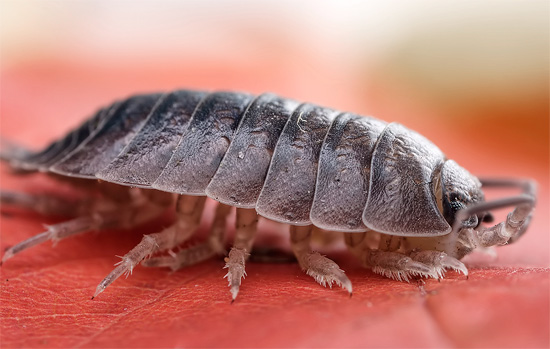 As well as a number of other interesting and useful nuances concerning the appearance of wood lice in apartments and houses.

Woodlice, as can be easily understood from their name - these are creatures who love moisture and dampness. Their natural habitats in nature are forest litter, wood and stones lying on wet ground, the shores of water bodies and the marsh spontaneously formed. 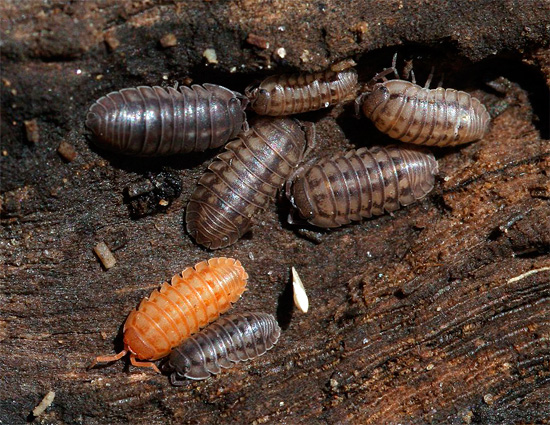 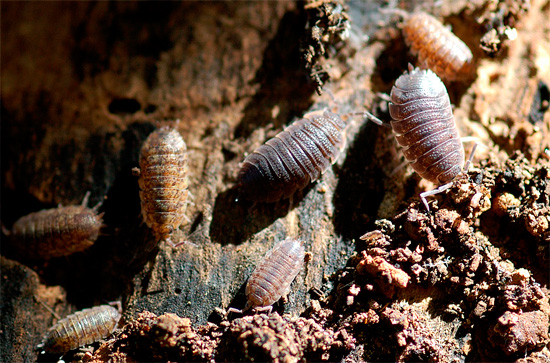 Accordingly, in the buildings of people similar places are attractive for them - crude cellars, basements,technical premises and routes of engineering networks in which there is always dampness, as well as attics with a leaking roof. Therefore, figuring out where the wood lice come from in the apartment, you should first look at such places in your house. 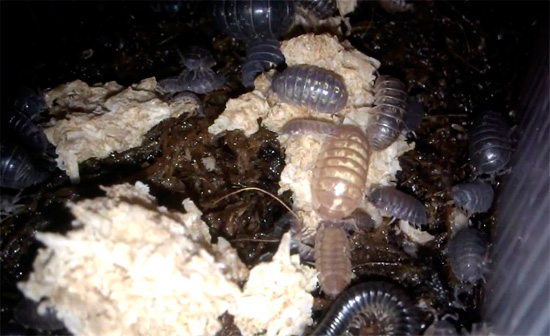 An ordinary person without proper training might think that wood insects are insects. In reality, this is not the case - they belong to the suborder of crustaceans, and even have gills.

What attracts wood lice directly to the apartment, for example, from a crude basement or attic? As a rule, these creatures, in addition to dampness, also to places with elevated temperature: 22-24 ° C, high humidity, lack of normal ventilation, the presence of even scarce but constant food sources (they can be served by a thin layer of dust and mucus on the tile) - All this makes the apartment quite a comfortable place for small crustaceans. 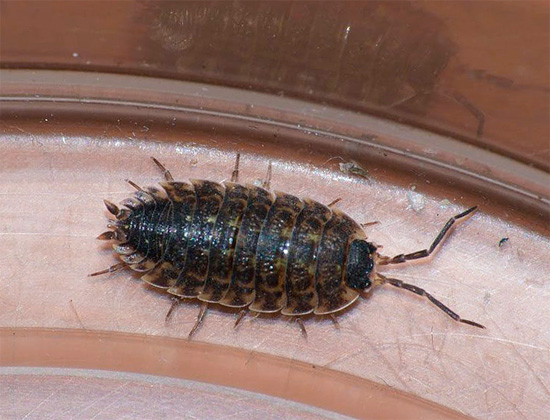 So, it is important to remember: woodlice appear in the apartment when there is always an excess of moisture in this or that room. That is why these guests most often choose bathrooms, toilets and kitchens, crawling here from their breeding grounds.Sometimes wood lice multiply in attics literally hundreds and thousands, after which they climb through the ventilation system into the living quarters.

However, before you begin to understand where lice come from in your home, it is useful for you to begin with to make sure that these creatures are in front of you. By the way, many housewives easily confuse woodlice with silverfish, despite the fact that the difference between these arthropods is quite noticeable. Look closely at the photo below - they are showing woodlice and silverfish close-up. The first live in wet places, the second - in dry; and the rest of their lifestyle and diet vary greatly. 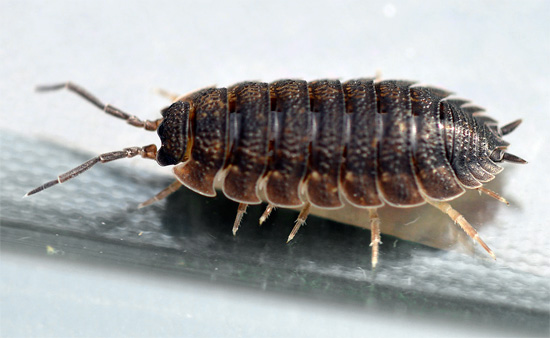 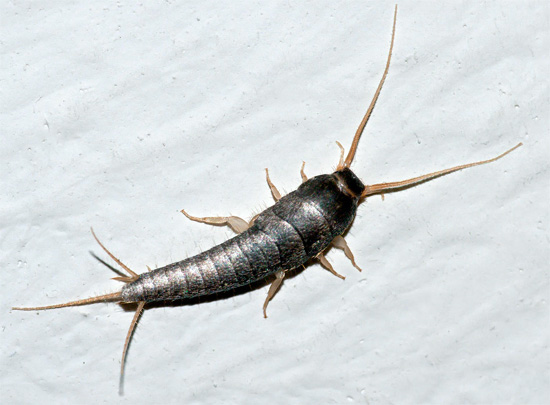 How and from where woodlice penetrate the room

As already mentioned above, wood lice appear in the apartment mainly from basements and attics of multi-storey buildings, as well as from the structures of engineering networks - heating mains, trenches of electrical cables, sewer tunnels, garages and various technical holes. These small crustaceans are quite mobile, but it is difficult for them to actively move along vertical walls and structures inside houses. Therefore, woodlice often appear in the apartments on the first and last floors - here they can easily get from the basement or the raw attic.

In addition, wood lice in the apartment are sometimes taken from other premises that may be located nearby: supermarket warehouses on the first floors of apartment buildings, self-built garages adjoining the wall of a residential house, and also from sewer channels. 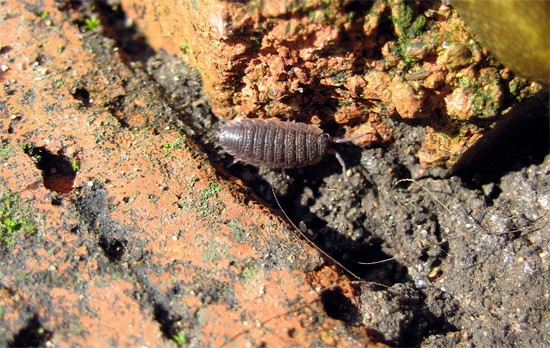 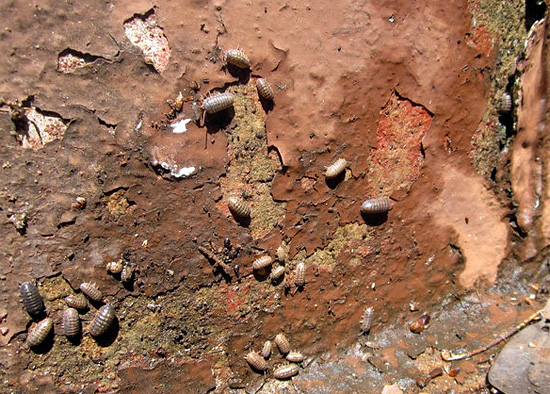 It may seem strange to someone that woodlice are capable of multiplying very actively in attics - how do they survive here and what do they feed on? In fact, everything is quite simple: randomly found here individuals, pioneers among the perennial layer of pigeon droppings find quite good conditions for reproduction. 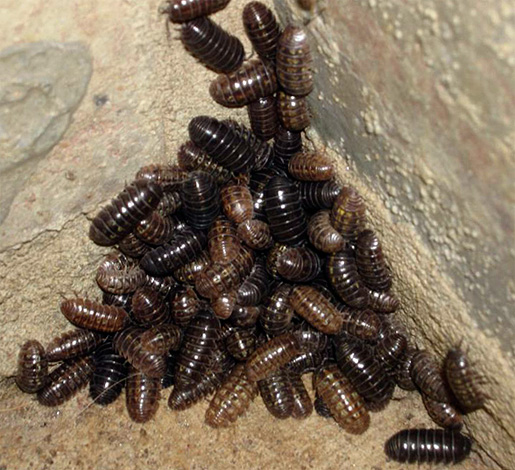 It is not surprising that under such favorable conditions for wood lice, they sometimes multiply in attics in unbelievable quantities and begin to literally attack the inhabitants of the last floors. The cases of woodlice penetration into the bathrooms and toilets of apartments from attics, as a whole, are rarer in comparison with basements, but they are characterized by a very large number of uninvited guests entering the apartment.

In the local city news from different parts of the country there are regular reports of the influx of wood lice on the top floors and precisely from the ventilation ducts. Uninvited guests can be so numerous that literally a continuous stream of crawl along the walls, fall into the dishes, crawl into the furniture. And what is most interesting is that in such situations SES employees do not always notice any violations of the sanitary condition of the houses and, accordingly, take no action.

Usually in practice, the situation is as follows: wood lice appear in the apartment alone, first in small quantities, and rarely come across. As a result, the first aliens turn out to be unnoticed by their owners. 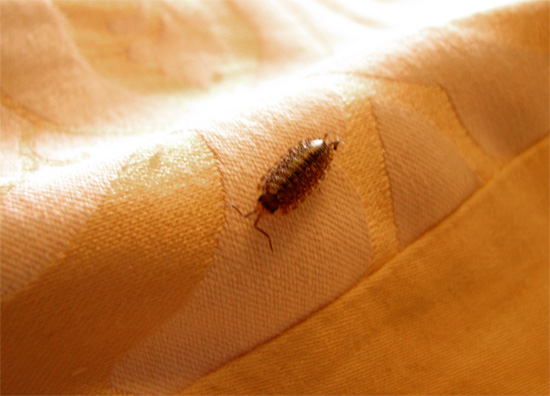 Later, when several dozen uninvited guests migrate to the apartment, they end up inadvertently caught the eye in the bathroom or toilet, and then the owners start a little panic - after a careful examination of the room, it becomes clear that the floor lice in the apartment is full! The first question - where did they come from in the apartment and how to get rid of them?

Further, wood lice begin to fight like cockroaches - small, Dichlorvos, even insecticidal gels. All this can really give a certain effect, but first of all you need to find out where the “home” of the fans of dampness is located and eliminate the source of this dampness.

If it is not possible to quickly solve the problem with dampness, then it is useful to take care of blocking the passage of wood lice from the damp room into the apartments. 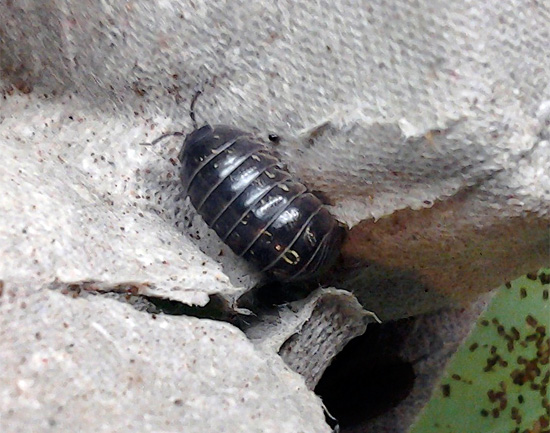 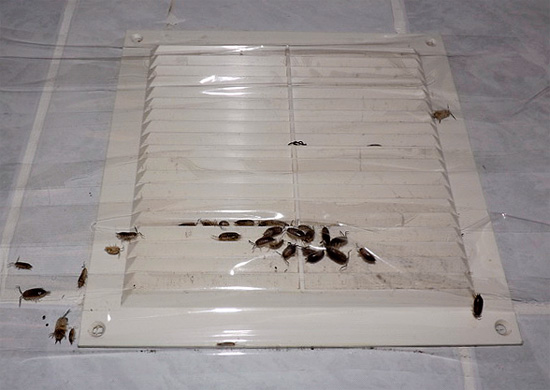 Where woodlice live in the city

In different cities, biologists have repeatedly conducted studies to find out the places in which wood lice prefer to live. It turned out that these small crustaceans live mainly in the following places:

Here wood lice huddle under stones, various large objects, under mowed grass and in garbage. Food in such places they serve any decaying plant debris - the same cut grass, rotting fruits and vegetables, plant roots. Wood lice feed mainly at night, occasionally leaving their shelters during the day or at dusk. 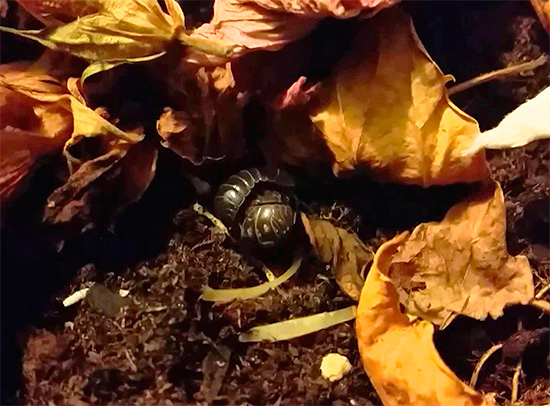 The most common in the cities of central Russia are two types of wood lice - common arctic arctic beetle and rough lice. The first is best known for its characteristic appearance: it is often called “watermelon”. The second one is more mobile, less often folds into a ball and relies mainly on its speed. It is the rough wood lice that most often turns out to be an unwanted guest in the apartment.

Is it possible to bring wood lice into the house?

As a rule, woodlice penetrate into the room independently, making their way from the usual habitats to more comfortable conditions for them. These arthropods try to stay away from sources of light, vibration and noise, and therefore on clothing or in personal belongings are almost never.That is why the probability to bring wood lice into the apartment is very small.

In very rare cases, wood lice can be brought into the house with purchased products - potatoes in bags and nets, carrots and onions, fruits in boxes. But in this case you should not be afraid of the guests - they are unlikely to take root in the apartment, which they did not make their way to. 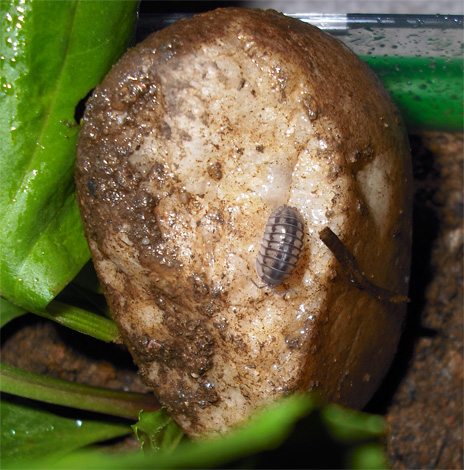 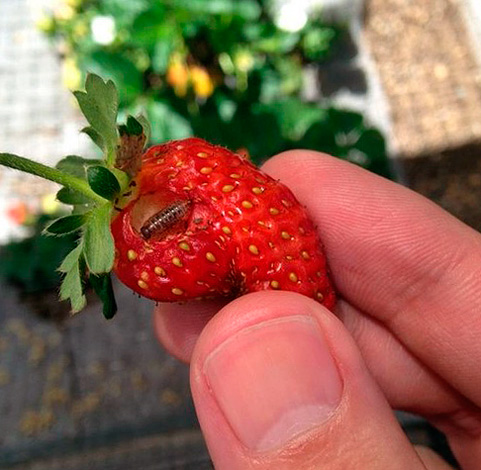 The truly undesirable in the apartment of a person are only those woodlice, which are taken from the basements and from the street and get into the wet rooms. It is they who tend not only to settle for a permanent dwelling in an apartment, but also to actively reproduce here.

In this case, woodlice is a sign that the apartment has areas with poorly regulated ventilation and constant dampness. Such places should be found as soon as possible and brought to a normal state in order to avoid more serious problems than the presence of wood lice (for example, the constant presence of mold, which by its spores will poison all the air in the apartment). 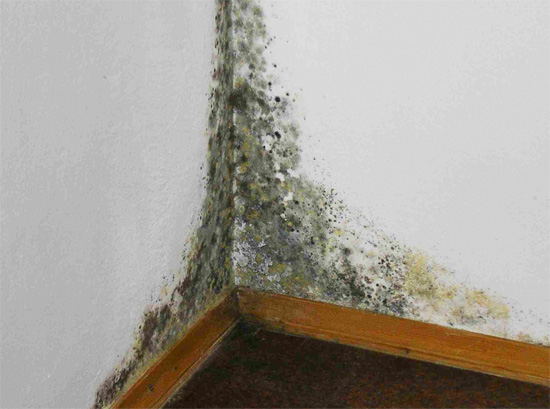 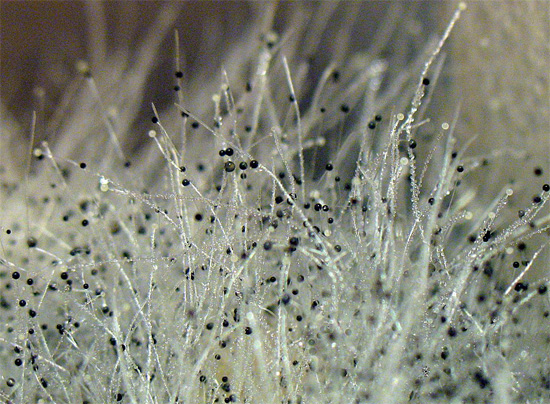 Beloved habitats of wood lice in the apartment

In most cases, wood lice are found in apartments in the following places: 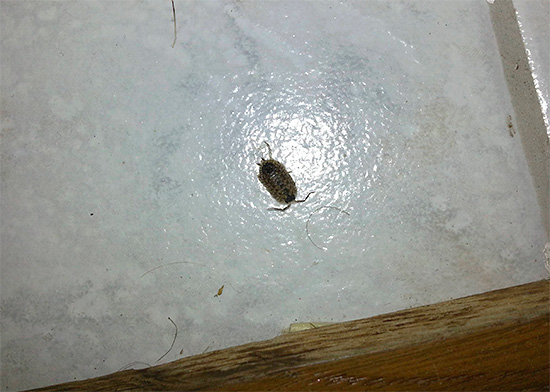 If wood lice are found in the same room, they should definitely be searched in other rooms and extensions - perhaps where they are most of all, they are the least visible. Be sure to inspect for this purpose and ventilation ducts.

In general, woodlice usually settle where moisture exceeds sanitary standards for residential premises. These crustaceans are a good indicator of the presence of permanent water leaks, pipeline breaks, stagnant sewage.

If wood lice were found anywhere in the apartment, you should look for places where the water supply and sewage systems, insulation on the walls, plaster and the integrity of the walls themselves can be disturbed. Once such damage is detected, they should be repaired as quickly as possible.The direct destruction of wood lice makes sense to do only when conditions favorable for their residence are completely excluded.

What causes the inaction of utilities ...

It is also useful to read: Details about woodlice: interesting facts about their lives and photos
See also:
To the entry "Where do woodlice come from in houses and apartments and what is the reason for their appearance" 3 comments