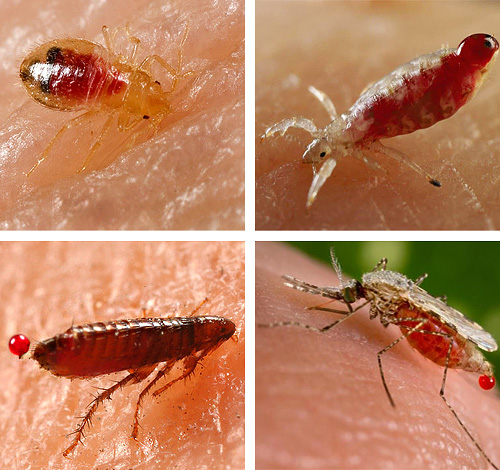 The regular presence of blood-sucking insects in bed is not only sleep disturbances, nightmares at night and itchy bites in the morning, but also a constant risk of infection with rather dangerous infections. Yes, such that the next day you can be busy all day alone getting rid of such bites. For example, some blood sucking parasites of a person are potentially capable of carrying plague pathogens, encephalitis (and not only ticks), anthrax and typhoid. This alone is enough to immediately take measures for their breeding at the first suspicion of the presence of “bedding” insects in the house.

You should not expect that life in a big city and a comfortable apartment is guaranteed to protect against insects in bed. A characteristic feature of such parasites is their indifference to the cleanliness and sanitary condition of the room, because they feed on blood, not the remnants of our food. 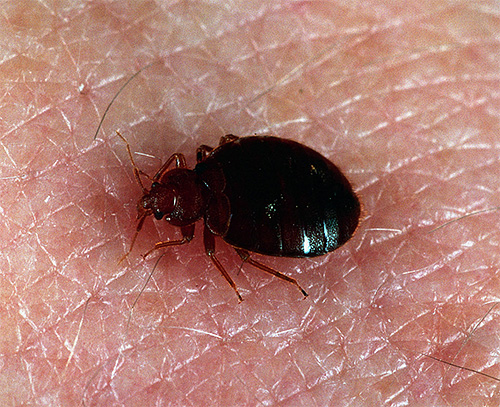 Perhaps the most unpleasant blood-sucking insects that can be found in your bed is domestic bugs. It may seem strange, but they are a real disaster of Amsterdam, London and Stockholm. According to statistics, in the majority of large European cities the number of apartments and houses infected with bugs is constantly growing, and pest control services do not always cope with rapidly breeding parasites that have time to develop resistance to the insecticidal agents used. According to statistics, more than half of homes in Florida, USA, have also been infected with bedbugs ever.

Understanding which insects bite you in bed makes it easier to catch the parasite right at the crime scene, carefully examine it and compare it with the photos below. The following are photos of the most common "bed" insects, where you can find out your offenders.

Bed bugs - their length, depending on age and degree of saturation, usually varies from 2-3 to 8 mm. In the photo below this is shown on the example of an adult bug. 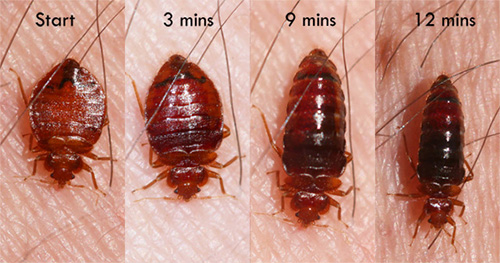 And this is what the bed bug bug looks like: 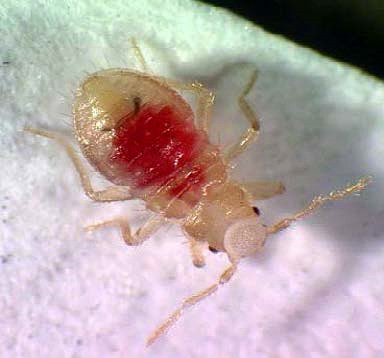 Fleas usually bite in the morning.They jump very well, and if it is impossible to catch an insect in a bed, it is possible that it is them.

The photo shows a flea on the human body at the time of the bite: 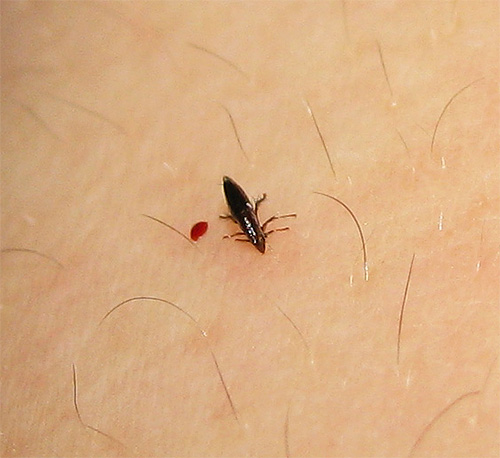 Linen lice - insects, not even tied to the bed, but more to the human body. They bite around the clock, but at night their activity is especially noticeable. 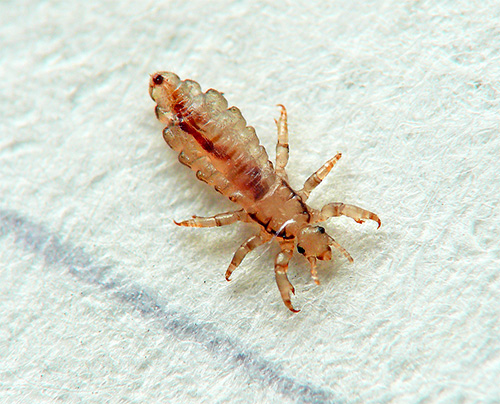 BUT so look nits - lice eggs in a dense shell: 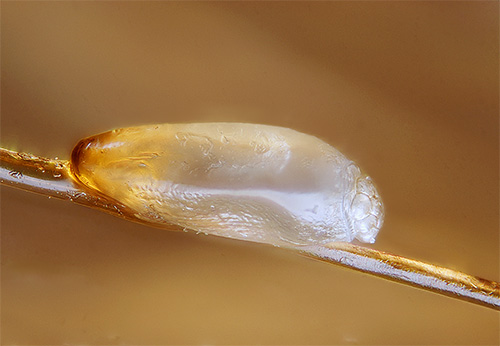 And, of course, mosquitoes - everyone knows them, so there will be no problems with their identification: 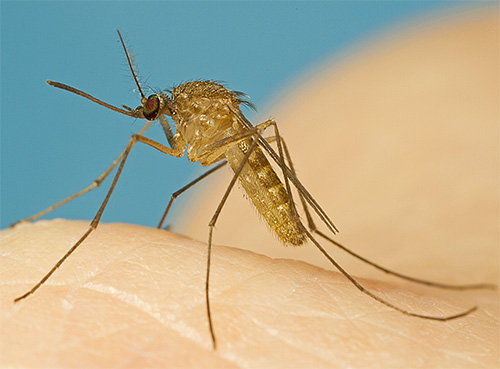 Some of these insects can be identified by the appearance of bites, but the safest way to see the parasite itself is live.

Generally speaking, insects, which can be found on the couch or in bed, include domestic cockroaches, but such cases are quite rare. Meanwhile, even the usual red cockroaches with a lack of water can eat around the epithelium around the lips of sleeping people, especially in children. This is the case when you can say that even cockroaches bite. 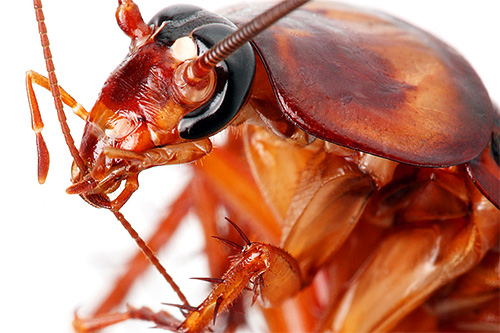 So, if you have already recognized what insects bite in bed, it's time to get acquainted with these parasites in detail, to find out how you can fight them ...

Bed bugs are perhaps the largest human blood sucking parasites, which are still quite common in apartments to this day. Below the photo shows a few of these insects on the bed (usually this picture can be observed at night, when suddenly turn on the light): 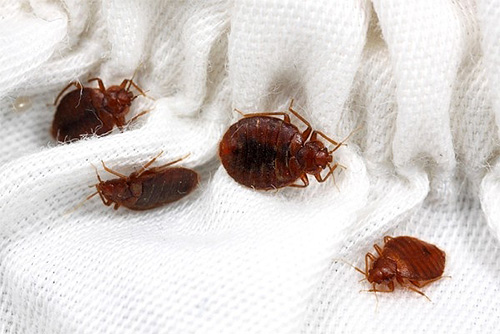 And in the next photo - the nest of bedbugs in the couch. These insects prefer to hide as close as possible to the places of human rest: 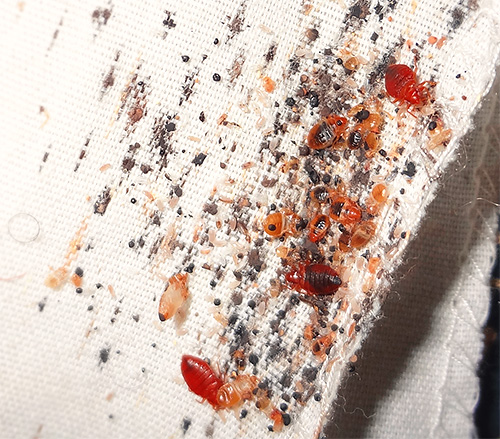 “This is a nightmare of some kind. Never in our life in our apartment were there any insects, and then they began to discover that in the mornings some bites appeared on the body. Started to find out and once caught a bug at night. Such a creature nasty, still fat, it is clear that the blood was pumped. I was hysterical, I went to live with my girlfriend, and my husband summoned some services so that they all poisoned. Now it seems they are not there, but I still check myself in the morning. ”

Each bug should eat blood every few days. Larvae need it for growth, and adult insects for reproduction. Their only food is human blood, which they suck, piercing the skin with a thin proboscis and reaching the blood vessel.

The photo below shows traces of bedbugs in bed.Red dots indicate places where bloodsucking insects were accidentally crushed by a man tossing and turning: 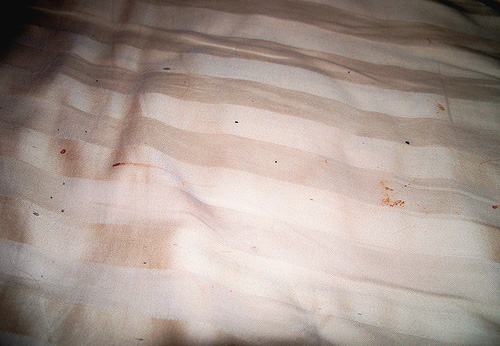 Initially, even at the dawn of human development as a species, bugs parasitized in caves on bats. And only when people began to actively populate the caves, switched to a new victim. Today, in some caves of Central Asia, there are populations of bed bugs that continue to parasitize on the bats.

Bedbugs are nocturnal, and to meet them in the apartment during the day is possible only in exceptional cases. In the daytime, they hide in sofas, under mattresses, in household appliances, behind baseboards and on bookshelves, and go hunting at about 2-3 in the morning. Bed bugs are the most common insects in furniture.

Next on the photo shows the bugs in the disassembled bed. These insects live in unorganized nests: 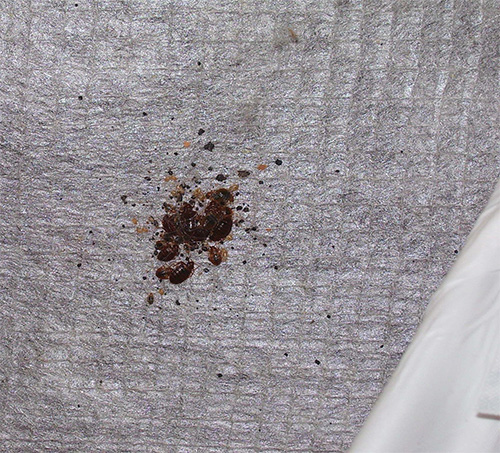 Bedbug bites and their consequences

Bedbug bites look like red spots on the skin with a characteristic point where the insect injected the proboscis. Often the bug leaves a whole chain of 3-7 such bites, piercing the skin in several places.It is for such chains (paths) that these insects, which often live directly in the beds, are easily recognized. 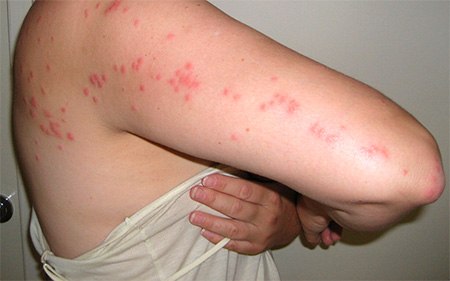 With a large number of bed bugs in the house and a high sensitivity to their bites in a person, the field of attack may develop an allergic reaction with abundant rash on the skin and generalized symptoms. In children with heavy and regular bedbugs, anemia can even develop. In addition, the constant itching of the bites does not make the victim feel normal, and when combing the wounds pustular inflammations can develop. 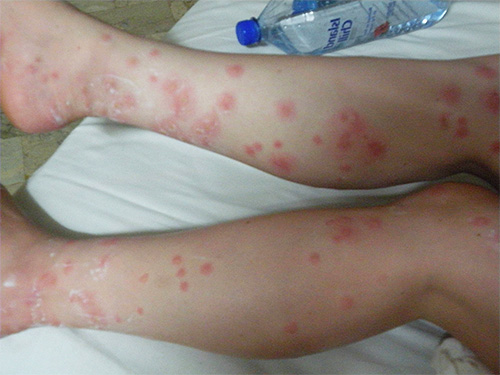 Bed bugs are potential carriers of many infections, but they have not documented cases of transmission of diseases such as HIV or hepatitis by them.

How to deal with bedbugs

There are two reliable ways to remove bedbugs:

Independent excretion of bedbugs is cheaper, but it requires a serious investment of time and effort. When contacting the disinfestation services, you need to be careful not to run into fraudsters or those who, in fact, do not do work.

In the photo - bedbugs nest in furniture: 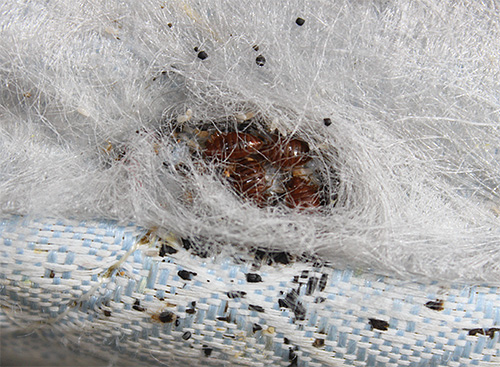 If these insects are bred in a sofa or other furniture, they can be frozen outside in the winter at temperatures below minus 20 ° C. However, this method is rarely effective, because the bugs often hide not only in the sofa, but also in other places in the apartment.

You can also destroy bedbugs in the apartment with heat, raising the temperature in the room to + 50 ° C, which is usually achieved with the help of industrial fan heaters. Of course, such a procedure should be carried out very carefully and with all precautions.

Fleas: when they bite and how to fight them

A flea is a small jumping bloodsucking insect that attacks mainly during daylight hours.Not everyone thinks about it, but potentially fleas are able to tolerate plague, anthrax, typhoid, encephalitis, brucellosis and many other serious diseases, therefore these parasites should be carefully avoided. 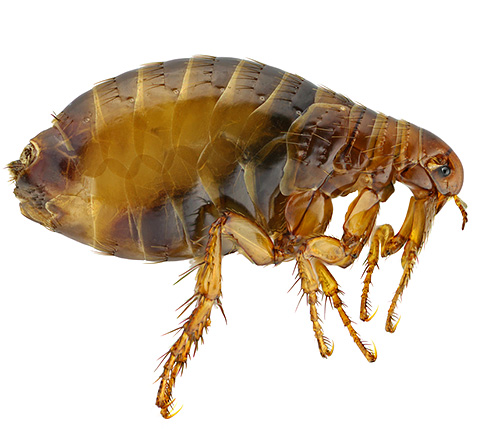 It was the fleas and their owners - the rats - that in the Middle Ages became the cause of the extensive pandemic of the bubonic plague, during which almost a third of the European population died out.

Flea bites quite similar to bedbug bites and can also form characteristic tracks, only short ones.

In the photo - a flea on human skin: 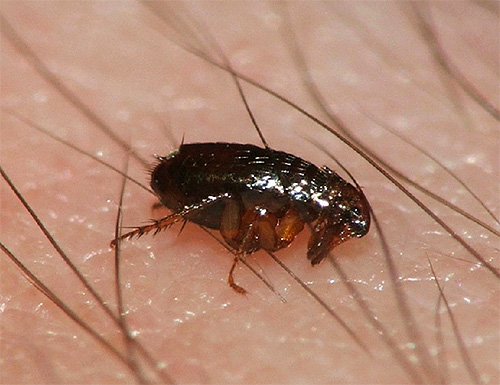 These insects are clearly visible on white bedding, but it can be quite difficult to catch them: they jump so fast that the jump itself is not at all noticeable.

It is necessary to remove fleas in two stages: first, they are poisoned in domestic animals, and then - in the whole apartment. 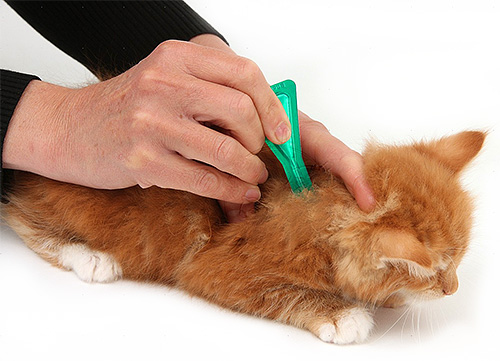 Sometimes fleas have to be poisoned again if the contamination of the premises with them is especially great.

When baiting a flea in an apartment, they use the same drugs as anti-bedbugs. But for the removal of fleas in cats and dogs need to use a completely different means, more gentle and safe, with low concentrations of insecticides.

Lice: parasites that are always near

Lice in bed are quite rare.For these insects, it is fatal to fall from a person’s hair or body — they are slow and rarely able to get back (it’s vital for them to very often feed on blood). Typically bedding blood-sucking insects lice can not be named. 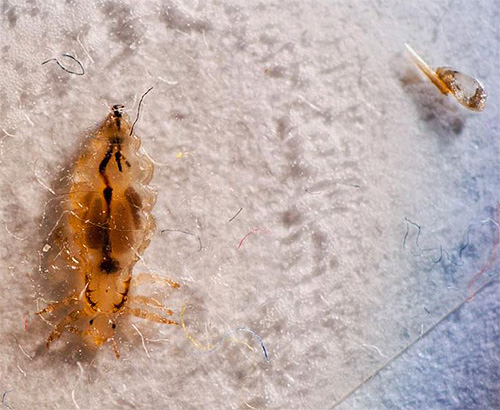 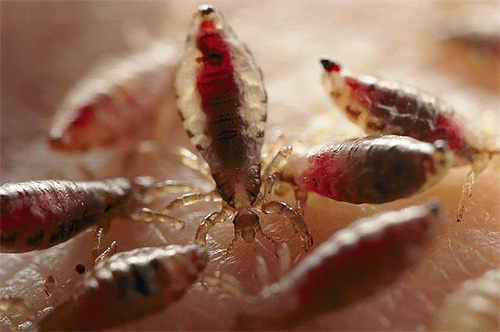 All life lice spend on the head (head lice) or other hairy parts of the person (pubic lice). There are also linen lice living in clothes, but today they are found only among vagrants who very rarely change clothes and never wash them.

Louse bites usually outwardly less pronounced and less painful than the bites of fleas or bedbugs, but because of their large number they can also cause very severe itching.

On the photo of the nits in the child's hair (lice eggs): 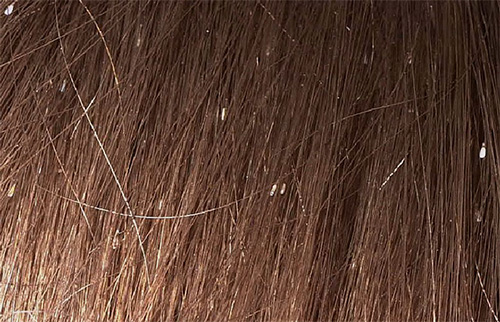 Remove lice should be a special pediculicidal shampoos or sprays. Special thick combs also work well against them to brush parasites out of their hair.

Do cockroaches bite at night?

Cockroaches bite humans extremely rarely. They are inhabitants of kitchens, eat crumbs from the table and leftover food in trash cans. Only with very abundant reproduction and with a lack of water can they crawl onto the bed and nibble the epidermis around the lips and nose in humans.Today, such situations are sometimes found in hostels. 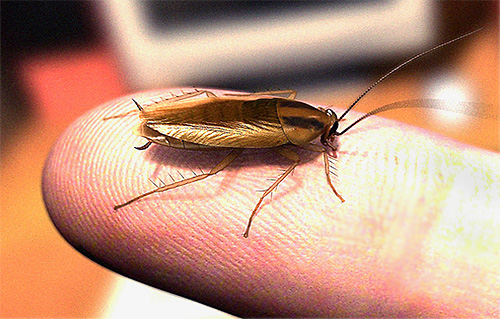 Of course, cockroaches are not blood-sucking insects, so even if they bite, it is not at all like a flea or bed bugs.

In any case, if you have been bitten by insects, bites should be processed to reduce itching and prevent infections: 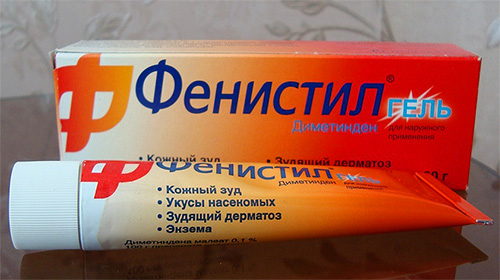 But if after the bites of blood-sucking insects the temperature began to rise and a characteristic skin rash appeared, it is advisable to show the person to the doctor. A bite allergy can have serious consequences, and even if at a particular moment it does not manifest itself very strongly, the reaction to bites can be extremely acute in the future.

How to choose a service for the destruction of insects

An interesting video: where do lice crawl from?