Lice bites look and cause about the same sensation in an infected person as the bites of other blood-sucking parasitic insects. In their place, small, highly itchy reddenings appear (parents at first often attribute their allergic reaction to the child). With a large number of bites, characteristic bluish spots on the skin sometimes also appear.

Typical head lice bites are presented in the following photo: 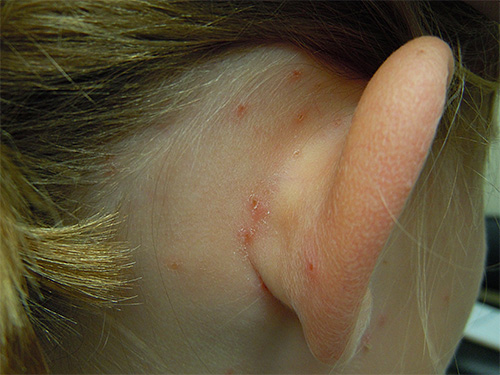 Lice are best known as parasites of hairy areas of the body, and therefore the effects of infection with them are usually sought on the head. However, people who, for various reasons, do not change their clothes for a long time, especially lingerie, which bites for any parts of the body that are under clothes, may appear. For example, the photo below shows typical lice bites on the body: 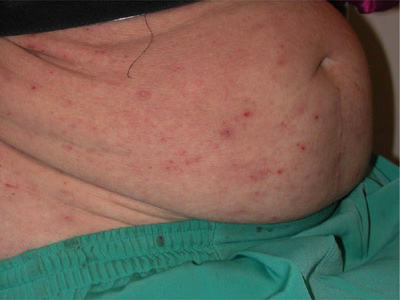 Given the fact that lice have the potential to carry pathogens of very dangerous diseasesIt is useful to know what a louse bite looks like and how it differs from other insect bites in order to take steps to get rid of parasites as soon as possible when it is detected and identified.

What are dangerous bites lice

Even lice bites themselves can create considerable discomfort by the constant itching and possible allergic reactions of the body to them. This is especially characteristic of the bites of pubic lice - here the unpleasant sensations of bites literally for a minute do not allow a person to relax. 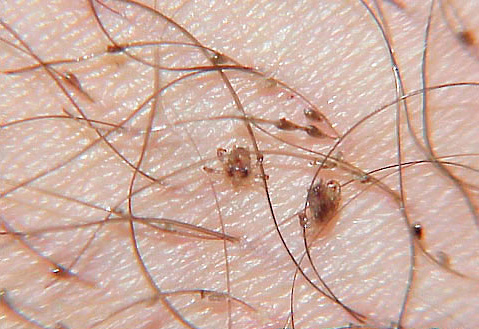 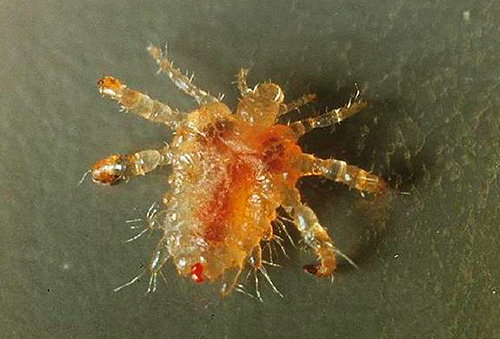 Allergic reactions to bites of lice usually appear with severe infection and manifest themselves as rashes in places of the most massive bites. There may be swelling of the tissues, and sometimes - an increase in body temperature and an increase in lymph nodes.

The Roman emperor Sulla suffered from pubic lice in neglected form. His contemporaries testify that the servants almost continuously removed the parasites from Sulla, and his entire body was covered with festering wounds at bite sites.

Permanent scratching of itchy bites can lead to the suppuration of scratches and the further development of pustular infections, which in its advanced form can develop into pyoderma. 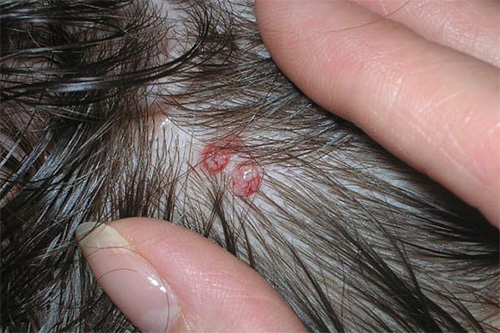 No less dangerous, and infections that are transmitted by lice with bites. So, cootie and, less commonly, head infections are carriers of pathogens of typhus or relapsing fever, as well as some types of fevers. Each louse bite is the risk of infection of one of these diseases (infection can occur when combing bites, when lice are accidentally crushed and their internal contents are entered into wounds).

Photo of louses on clothes: 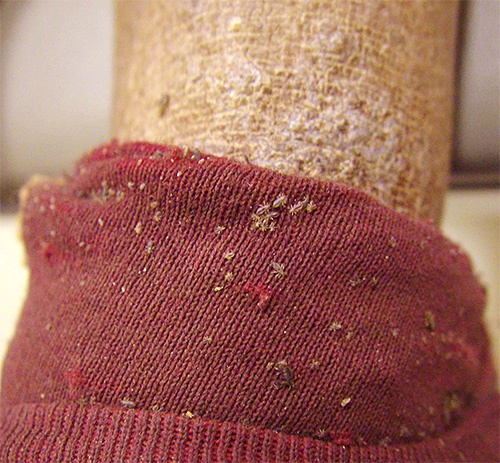 It was typhus carried by head lice that caused the death of many thousands of people during the Napoleonic wars and the First World War. According to some historians, during these wars the number of people killed by typhus exceeded the number of those who fell on the battlefields.

Perhaps, compared with these dangers, the fear of being ridiculed by peers, which is tormenting the majority of children infected with lice, seems like childish stupidity. But precisely this fear leads to the fact that the disease has time to develop. Therefore, the skin of the child on the body and head should be regularly inspected and immediately take effective measures if lice bites are detected.

In the photo - nits in the child's hair: 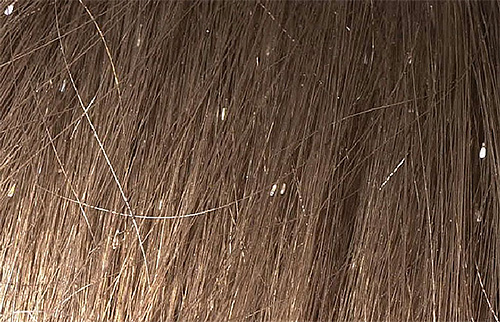 Most often children are infected with lice in friendly teams - kindergartens, summer camps, hiking. It is on his return from such places that one stands under various pretexts to carefully inspect the head of the child and his body.

Lice bites look like small red little bloated specks. On a fresh bite, you can sometimes see the puncture point of the skin - a drop of dried blood remains here for a while. A few hours after being bitten, she is no longer visible.

With a small number of lice their bites are hardly noticeable. When the parasites become many, mass bites in the most favorite places they merge into extensive spots and become similar to allergic rashes.

On the photo - lice bites on the child's neck: 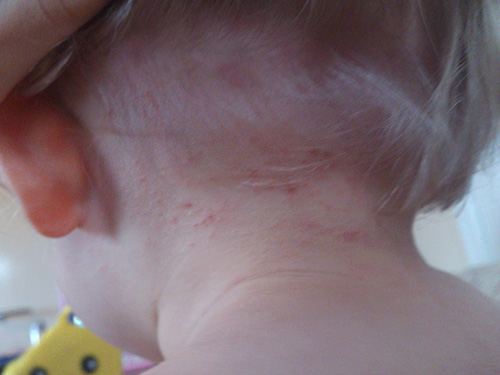 And in the next photo - inflamed bites of lice: 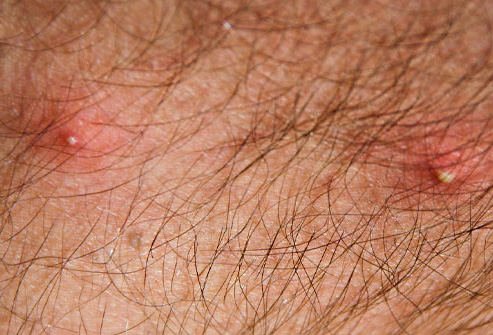 For lice bites characterized by the appearance of small bluish spots around the places of greatest damage. There is nothing dangerous in these spots, but for them, pediculosis is easiest to distinguish from the bites of other insects.

With the development of an allergic reaction, the rash and the bites themselves merge into spots, the surface of which can become covered with a thin crust.Usually it does not come to this, since lice start to fight much earlier, but in cases with homeless people this is a typical situation. The photo shows what the lice bites look like, complicated by allergies and pustular infection: 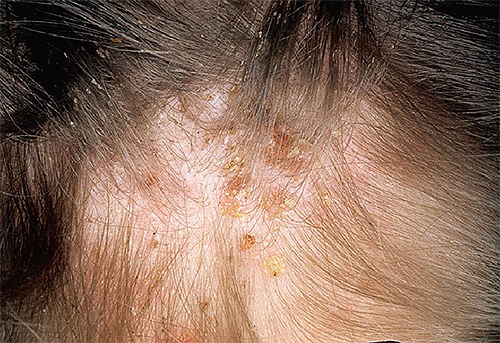 There are situations when the bites on the skin turn out to be completely unnoticed by an infected person: some people with insensitive skin almost do not feel the bites of lice and do not pay attention to their consequences. These cases are one of the most severe, since the symptoms of pediculosis in such people are felt only in the later stages of infection, and before that lice have time to multiply in large quantities and infect many of those with whom the patient communicates.

Differences of lice bites from other insect bites

Bites of head and pubic lice are almost impossible to confuse with the bites of other insects - no other parasite bites regularly on the hairy parts of the body. Therefore, if large amounts of bites regularly appear in intimate places or on the head, this is a serious reason to suspect the presence of lice. 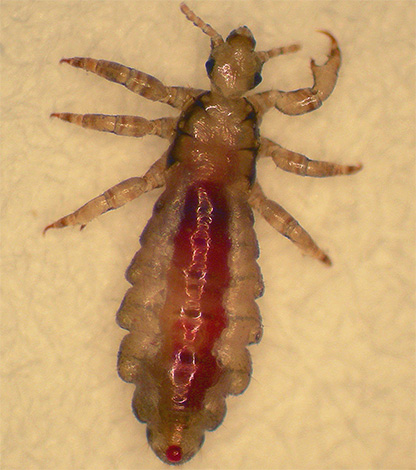 But the bites of lice can easily be confused with the bites of bedbugs or fleas - they are about the same size and appearance.The most characteristic difference in louse bites is that they lack distinct chains of several bites. Such chains leave bugs and fleas, for lice it is not typical. 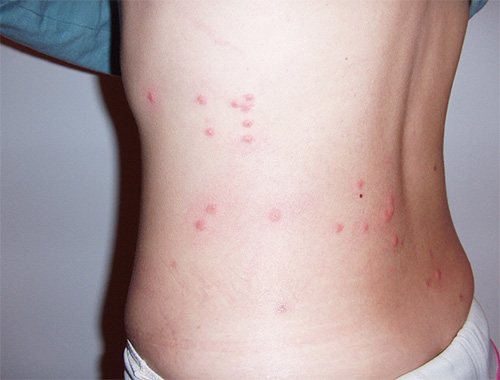 It should be remembered about the blue spots in the field of bites: they are also a characteristic sign of lice.

The whole process is in the details.

The way lice bite is very similar to a similar process in fleas. During evolution, the louse's jaws turned into sharp stilettos surrounding the salivary canal and the oral cavity itself. With these stylets, the insect pierces the skin and gets to the nearest blood vessel, from which it begins to suck blood. 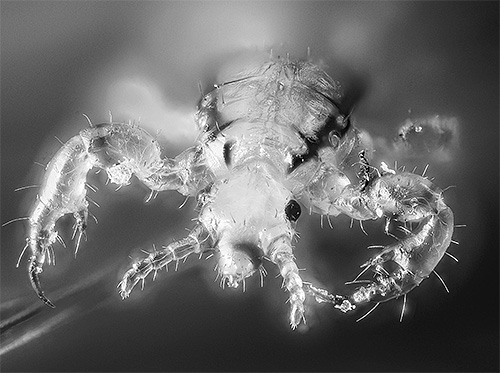 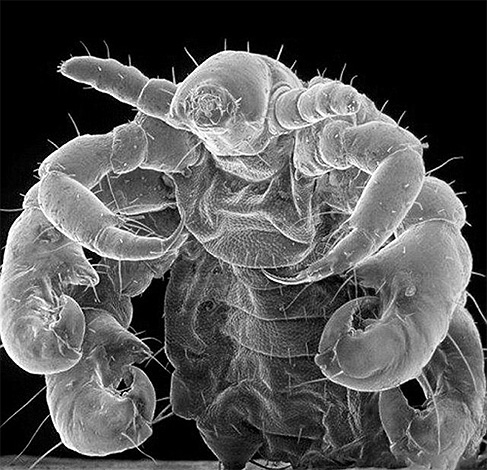 The posture of sucking blood is characteristic: at the same time, it slightly raises the back of the body and tries to immerse the head into the skin as deeply as possible.

Photography louse during the bite: 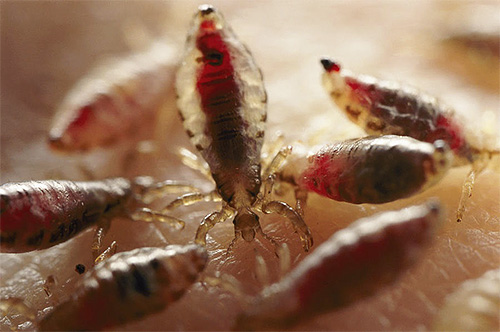 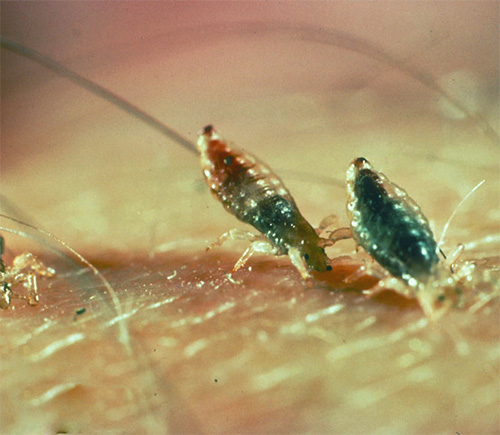 During a bite, the louse injects saliva through the salivary canal into the wound with saliva containing an enzyme that prevents blood from clotting. It is this enzyme, acting on the nerve endings in the skin around the bite, that causes further itching and redness. In lice larvae, this enzyme is produced in the body in insufficient quantities, and their bites are therefore less visible.

Nits do not bite, as these are just louse eggs in a special protective sheath that also ensures their attachment to the hair. The question of whether nits bite usually occurs in untrained people due to the fact that nits themselves are more visible than lice, and their number on the head is sometimes visually larger than the number of lice due to the large number of empty shells (dry nits). . Therefore, with constant itching it may seem that it is the nits that bite, which is completely wrong. 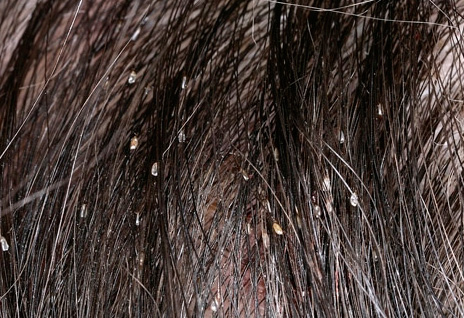 Immediately after the discovery of bites, you should look for the lice themselves. Head and pubic lice are here: on the hair of that part of the body where bites are found. 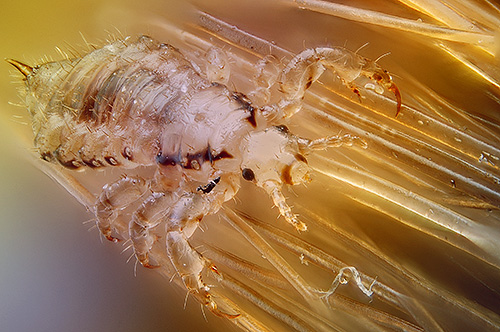 Body lice should be sought on the seams and the inside of the clothes that the infected person wears most often.

After the detection of parasites need to start their removal.

If the immediate destruction of lice is impossible, or bites cause severe pain and body responses, they should be treated:

If after bites the temperature rises or nausea and headaches appear, it is necessary to see a doctor. If you have a severe allergic reaction, diphenhydramine or diazolin may be prescribed in the hospital, as well as some specific antihistamines. Assign them yourself can not.

And it should always be remembered that lice is a serious parasitic disease. There is no talk of bashfulness or silence about the facts of bites, and at the first bites found, everything possible must be done to correctly identify the parasites and proceed to treatment. The sooner the fight against lice begins, the easier and faster it will be to get rid of them.

Interesting video: where lice come from and how to protect against infection

It is also useful to read: What appear lice in terms of people's will
See also:
To write "Features lice bites (with detailed photos)" 10 comments