By their symptoms, lice bites resemble in many ways the bites of others. human blood-sucking parasites, but they have their own characteristics. Basically, the lice bites are specific specifically to the person’s feelings, and in the photo you can see their distinct differences from bites for example fleas or bedbugs difficult. 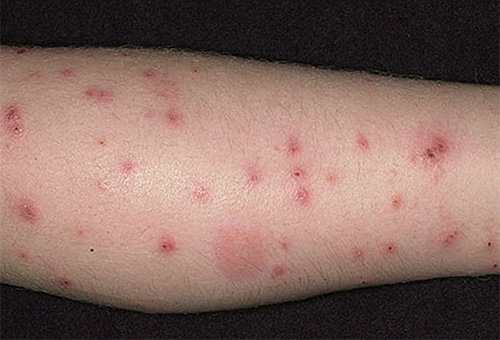 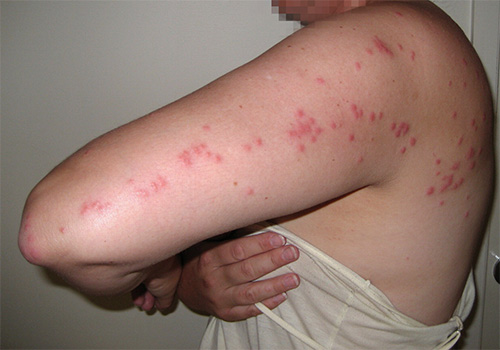 Underwear lice in the people are called lice clothes - a special form of head lice, which most of the time is spent in the folds of a person’s clothes, and they crawl on his body only to get enough blood. They also lay eggs on clothes, and because of the inability to starve for a long time, they are mainly found in people who do not take off, change or wash clothes for a long time. Exactly body lice can bite a person behind the back, arms, legs and sides of the body - neither the pubic nor the head louse is capable of it.

As a rule, suspicion of underwear lice bites occurs in people who have found unusual itchy lesions on their bodies that resemble insect bites. Their task is to find out who bit them and what measures need to be taken urgently.

Let's look at the main symptoms of bites. parasites, to immediately be able to identify them and take action before the lice begin to pose a serious threat to well-being.

The lice bites look almost the same as the pubic or head bites of their “relatives”. Each bite is a small, red, itchy swelling, usually well defined and separate from other areas of the affected skin. In the center of each such papule there is a clearly visible red dot - the trace of the hole through which the parasite sucked blood.

The photo below shows the laundry lice themselves at the time of the bite: 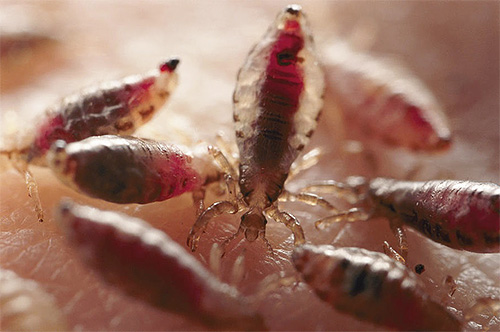 And in the next photo - separate bites of lice: 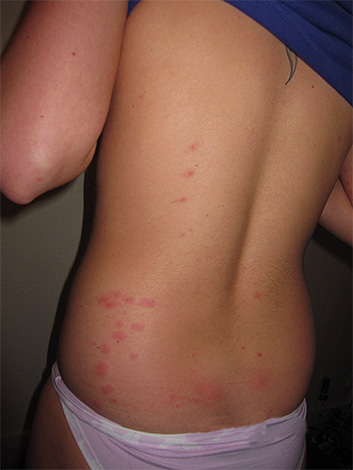 When a bite, a louse injects saliva into the wound containing painkillers, making the bite itself quite painless and can only cause a slight tingling sensation.Below are a few more photos that show how the lice bite: 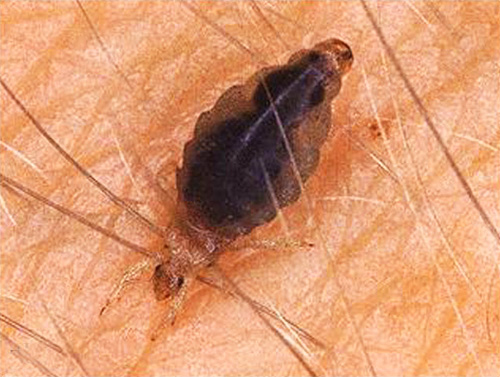 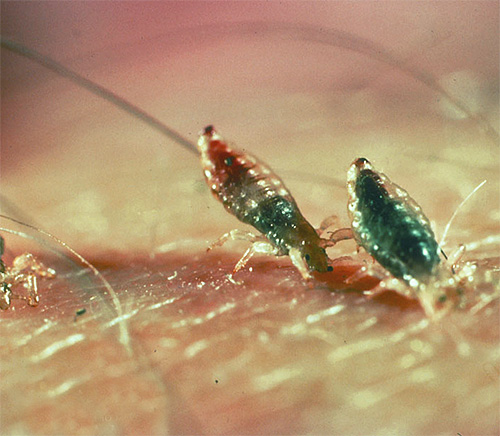 “After a week at the parents in the village, we began to suspect that it’s not mosquitoes that bite us. First, the mosquitoes themselves were not in the house, and we included the repellent regularly. And in the mornings all the same, itching, body bites are red, even where there was a blanket all night. At the same time, nothing seems to bother us or the child at night. Began to understand and found out that the entire bed is infected with lice. And only on one sofa, on which dad watches TV. They are small, sitting in all folds. We immediately took this bed and the linen from the other beds to the dry-cleaner's in the district center, sprinkled the whole house with pyrethrum, mattresses and pillows were fried in the sun, and it seemed that after that nothing bothered us. ”

Liner bites are localized most often in those areas of the body, which are adjacent to the folds of clothing. Usually it is the loin and the area near the navel, shoulders, neck, upper back, inguinal-femoral fold, armpits. However, parasite bites can be located on other parts of the body, up to the calves of the legs and forearms. 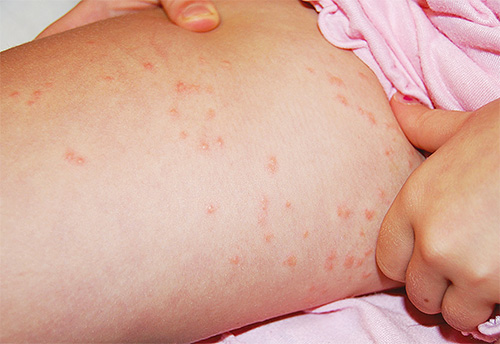 Bites of lice after some time become quite painful and cause severe itching.

It is normal for an involuntary reaction of a person to comb the bite site, but when they are found, they should be controlled and not combed to prevent scratching.

Symptoms of pediculosis and sensation of the patient

With a large number of lice, their bites cause a disease called pediculosis. Its symptoms are much more extensive and distinct than the signs of single bites: 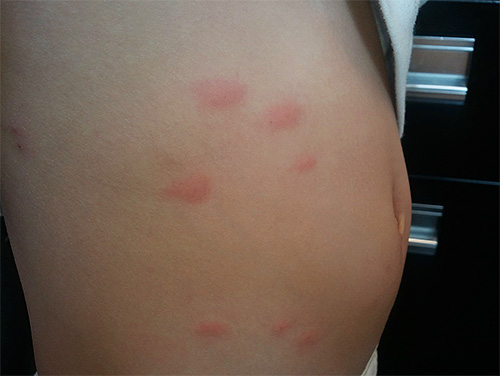 However, the symptoms of pediculosis are usually characteristic of people who have not been rid of lice for years and living in unsanitary conditions - vagrants, refugees, prisoners in camps in the tropics. The development of pediculosis is preceded by such obvious and unpleasant symptoms of attacks of parasites that, if possible, a person gets rid of lice before the development of serious injuries.

How to distinguish lice bites from other insect bites

The bites of lice resemble the bites of other insects in many ways, and a single papule can be easily confused with a bite, such as a bed bug. But if you look at the picture as a whole, you can find some differences: 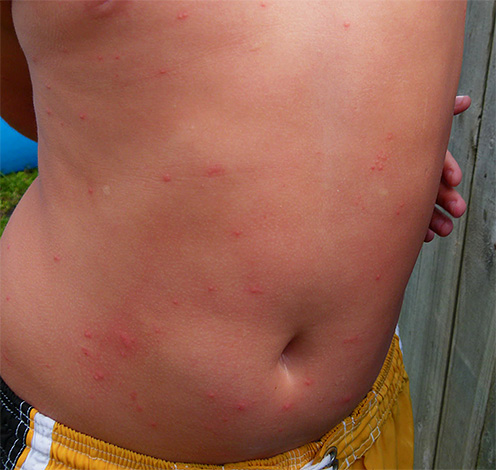 Sometimes lice bites manage to be confused with scabies (caused by scabies). However, with scabies, there are no visible traces of a puncture of the skin, and such delusions usually occur during scabies in places that are not visible to the victim - on the neck, under the shoulder blades, between the buttocks.

Dangers of lice bites such as pyoderma and the possibility of purulent diseases are not the only potential problems. History and parasitology show that lice-borne diseases are much more dangerous, including: 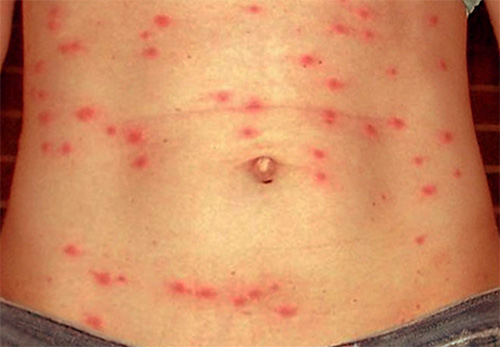 These diseases at one time were the causes of the death of many thousands of people around the world, but today only the poorest developing countries suffer from them.

Lice are one of the hosts of rickettsia - bacteria that cause a large number of quite similar diseases. In tropical countries, lice carry diseases unfamiliar to residents of the temperate zone, and therefore the full list of infections they carry is quite wide.

The first symptoms of diseases caused by the majority of lice-borne infections are fever, headaches, nausea, and fever. If such symptoms occur within a few weeks after strong bites from lice, you should consult a doctor without fail.

Usually, random and single bites of lice do not require treatment and pass without consequences after a few days.

In case of serious infection with parasites and the development of lice to get rid of itching should be used: 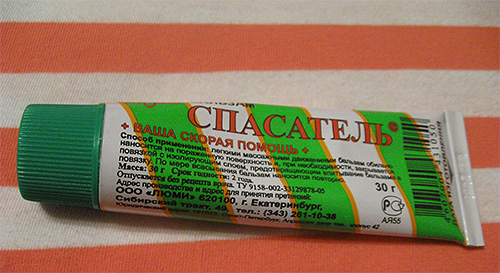 If pustular rash, rash on the body or other symptoms of pediculosis occur, it is necessary to consult a doctor as soon as possible. Self-medication - especially with a mistakenly diagnosed diagnosis - can be dangerous and can aggravate the situation.

Lice infestation and ways of getting rid of these parasites

It is also useful to read: Details about lice in humans
See also:
To the recording of "Lice Bites" 3 comments