How to remove nits from the hair: practical tips 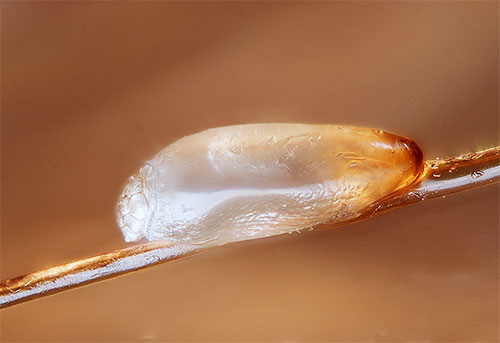 Removing the nits from the hair is, generally speaking, more difficult than simply pickling lice on the head. If adult insects die relatively quickly from insecticidal shampoos, sprays and creams, then nits not only turn out to be resistant to most of these drugs, but, moreover, even with direct mechanical action, they can only be torn off from the hair with great effort. The fact is that over the long centuries of evolution and parasitism on a person, lice have learned to attach nits to hair so firmly that it can be more difficult to tear off than to pull out the hair itself. Such a reliable attachment of eggs significantly increases the chances of future offspring of parasites for survival.

It is also problematic to remove the nits, for the reason that even with the use of powerful insecticidal preparations that can destroy the lice embryo in the egg itself, the nits themselves do not crumble from the hair. Even when they are dead, they continue to hang on the hair and create an untidy look. 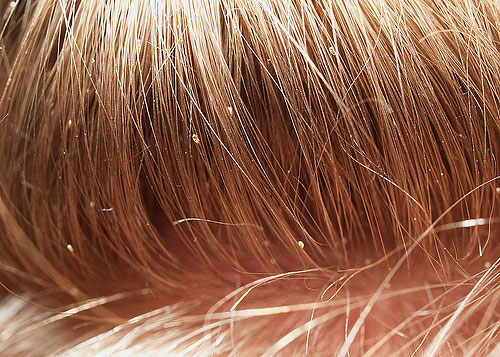 Therefore, we must be prepared that even after applying highly effective anti-lice products, it will be necessary to remove nits from the hair mechanically. However, do not be afraid - this work can also be greatly facilitated.

In the photo below you can clearly see what is a nit. This egg is in a special capsule, enveloping the hair at a great length. Such a capsule is formed from a special mucus secreted by the oviduct of the female louse and quickly set on air. Even when the nest larva hatches, the shell (dry nits) continues to hang on the hair for a very long time. 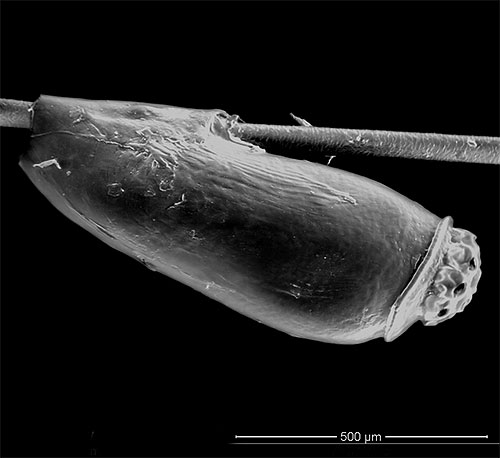 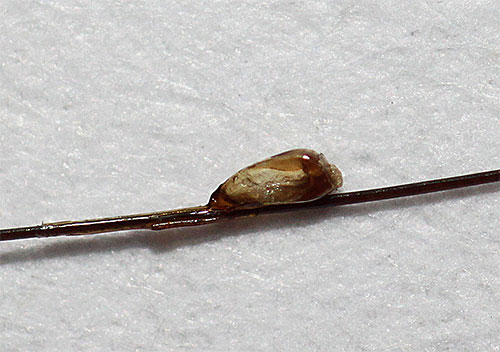 So, let's look at some effective ways that can greatly facilitate the removal of nits from the hair.

Lice and nits can be removed from the hair with the help of a special thick comb. This method is considered the safest for health, since it does not involve the use of chemicals, but it requires the greatest amount of time and effort.

For mechanical removal of parasites, wet hair is divided into strands, which one after the other carefully, from the root of the hair several times combed out with a comb. The whole procedure is carried out over a bath or over a white sheet, from which it will then be easy to shake out the lice and nits on the street. 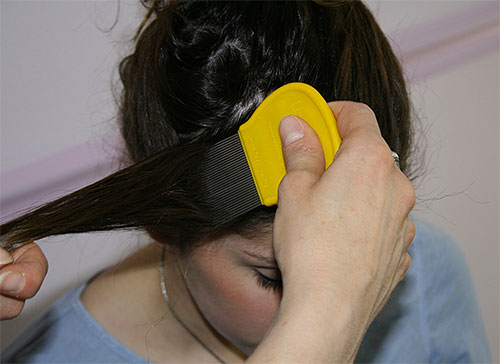 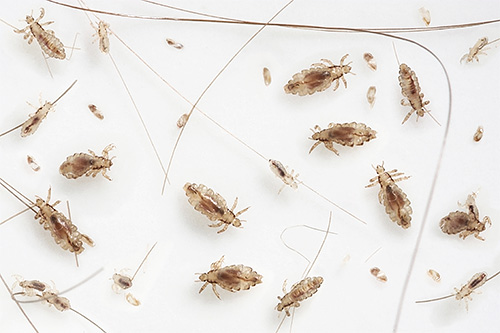 Today there are quite a lot of crests: RobiComb, NitFree, LiceGuard, AntiV crests are on sale in Russia. In addition, some pediculicidal shampoos and sprays come with branded combs - just for combing insects and nits. 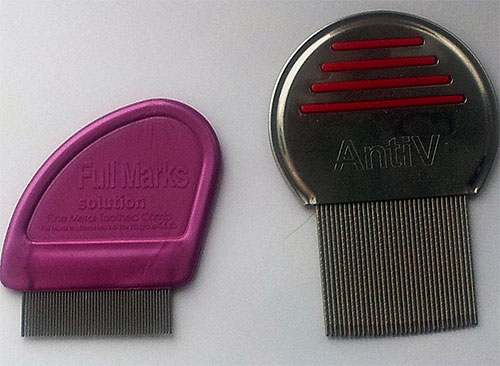 AntiV is the most popular comb in our country today, largely due to the high quality of the product and effective design, and partly due to massive advertising. In general, the crests of LiceGuard and NitFree are not inferior in their effectiveness.

Do not rush to buy widely advertised electronic combs to remove lice from the head: practice shows that the effectiveness of these products does not exceed that for simple combs, but the price is much higher. In addition, electronic combs for the most part have a narrower web, which complicates the task of fully working out the hair strands. 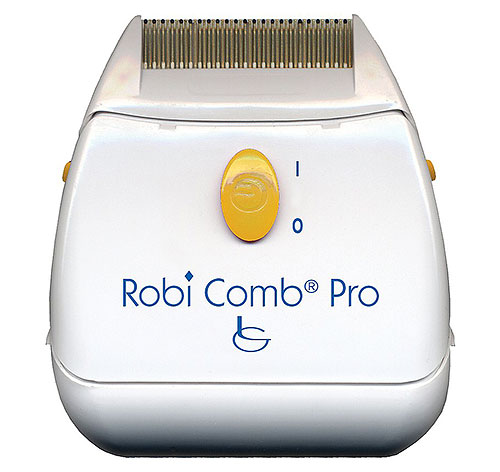 Combs can be used as an independent means to remove lice and nits, and in combination with insecticidal preparations.

In order to carry out an “anti-tire campaign” only with combs, the combing procedure should be carried out daily, preferably twice a day, for 10-12 days. After the first combing, it will be possible to remove the lice and nits in the largest quantities, but there will be very few living nits among them.

Then, as young larvae emerge from nits every day, they will be removed from the hair. Given that the period of development of nits is approximately 7-8 days, for 10 days of daily combing hair, it is usually possible to remove all young shoots of parasites.

Chemical method: we use modern technologies

It is easiest to remove lice from the hair with the help of modern pediculicides. Among them are sprays, creams, shampoos, lotions, emulsions. However, these funds for the most part do not produce an effect against nits, with the exception of certain preparations that contain insecticides of a specific action — such substances penetrate the shell of the nits and destroy the embryo in the egg. 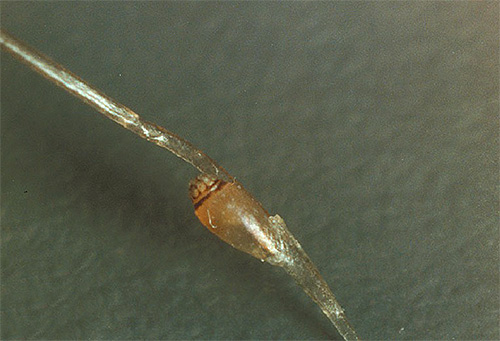 Treatments effective against nits include, for example, Pedilin shampoo, Para-Plus aerosol, Medilis Malathion emulsion.Before as kill lice and nits With these tools, you must carefully read the instructions for use and comply with all safety requirements. 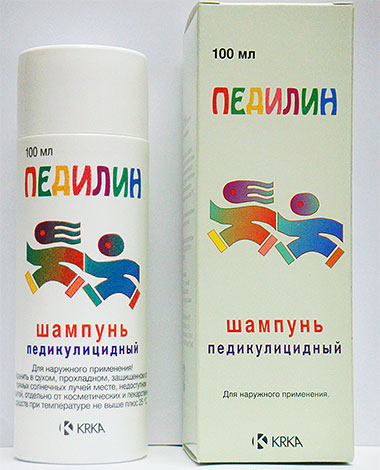 Chemicals for lice are applied to the hair in the manner implied by their shape. The preparation is kept up to the time allowed by the instruction and then washed off. As a rule, such treatment has to be repeated in a week to destroy the larvae that hatch from nits, which survived after the first treatment.

Some creams and lice shampoos may not be washed off the first time, and you have to rinse your head repeatedly.

It is more effective to combine chemical and mechanical methods: after the first treatment with any preparation, the hair is still wet after rinsing and combed out with a comb.

Thus, retarded (weakened) but not dead lice and part of nits are removed from the head. If, after a single treatment with the preparation, the head is combed out within three to four days, then it is usually possible to avoid repeated application of the agent.

In general, you need to understand that any pediculicidal agents only kill the lice, but do not remove dead insects from the hair.Remove the dead parasites from the head need or comb (can be simple, but thick), or frequent washing the hair for a week.

Among the popular methods of lice control, there are a number of quite effective tools that really help to remove adult lice and nits. For example, such products include kerosene, vinegar, cemerica water, cranberry juice and hydrogen peroxide - these funds, in addition to toxicity for adult insects, also soften the shell of nits. 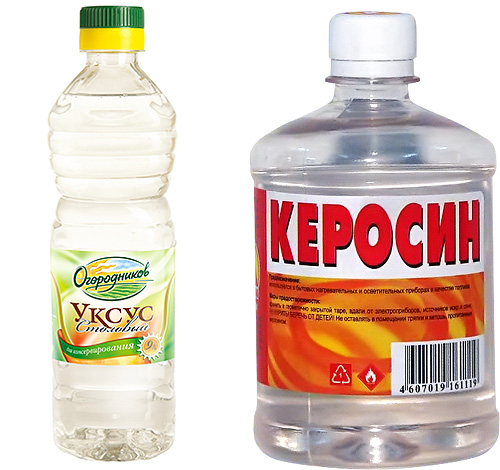 Even if the nit survives after this, it will simply fall off the hair. After that, you can shake it off the head, wash it off or comb it out.

However, almost all folk remedies have serious contraindications and can be harmful if used improperly. For example:

But such means as decoction of wormwood or tansy from lice are not very effective - they do not destroy parasites, but only frighten off, and therefore can only be used to prevent infection.

Anti-nits can be effective combination of folk remedies with combs, when the nits fall off after the solvent action of the tool, and then - combed with a comb.

Folk remedies, perhaps, have the only advantage over specialized preparations for lice - they are inexpensive.

When removing lice about the safety of the procedure of their destruction, you should always think more carefully than how to quickly remove lice and nits from the hair: sometimes it makes sense to process the hair twice, but not to damage them or the scalp.

In general, in order to avoid any trouble removing lice The following points should be considered:

You should be especially careful when using folk remedies - there are a lot of reviews about various side effects, as well as accidents after they are used (kerosene can ignite on the head, vinegar can cause serious burns with blisters).

It is also useful to remember: in order to guarantee the removal of lice without risk, serious costs, harm to health and constant combing, simply shave the hair at the site of infection. According to scientists, it is because of the fashion for shaved pubes that the pubic louse as a species is almost extinct today. So what prevents in the same way to destroy the head louse?

An example of lice literally teeming with hair

It is also useful to read: Can I use dust soap from lice and nits
See also:
To write "How to remove nits from the hair: practical advice" 105 comments