Traps for hornets and wasps: making your own hands and rules of application 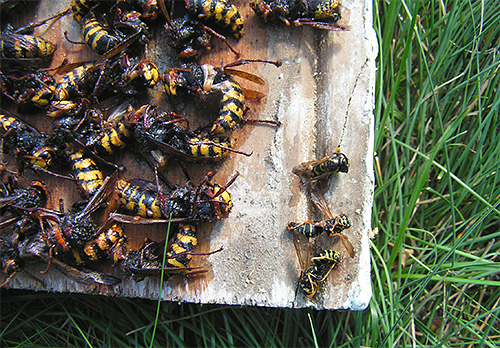 The basis of the diet of hornets are mainly insects. That is why hornets and wasps are good helpers of the gardener or gardener in the struggle for the harvest. They are able to destroy a significant amount of insects harmful to cultivated plants, and often those that are not eaten by birds.

However, such assistance is good only on the condition that the wasps and hornets themselves live somewhere in the district, and arrive at the site only to collect food. If these insects decide to live exactly near the house, and in the worst cases - indoors or directly in the yard, they need to be removed, since such a neighborhood is a real danger to human health. To get rid of such unpleasant guests is usually used a trap for hornets. 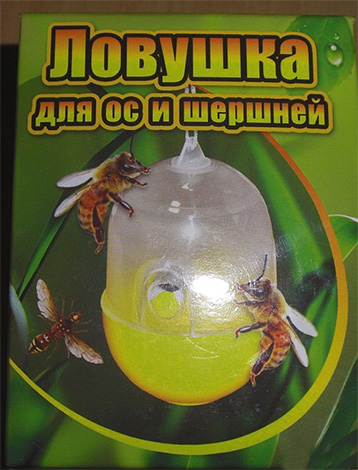 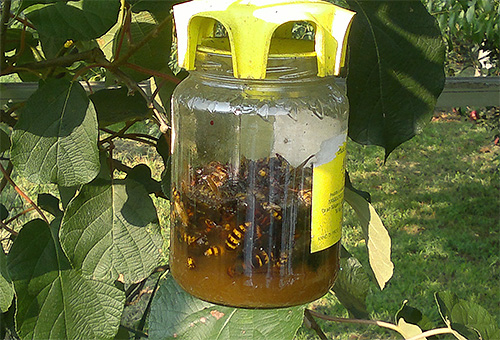 For a person with high sensitivity to the poisons of insects, one bite of a wasp, and even more so - a hornet,can be deadly. The poison of the hornet and wasp causes a powerful allergic reaction and can even lead to anaphylactic shock. These insects are of the greatest danger to children - in the case of serious bites, the child may develop sensitivity, and for all his life, stinging insects will pose a great danger to him.

In each case, you need to be able to choose the right method of dealing with wasps and hornets. 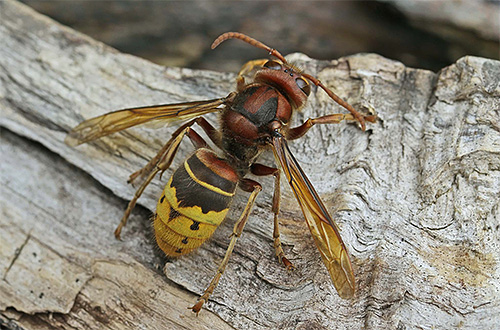 Often it is the trap that becomes the best way to get rid of them. However, as they say, each rule has its exceptions ...

“I caught a simple plastic bottle in my hornet’s plot. We cut off her top, turn it with the neck down and insert it into the bottom half. Before that, I poured a glass of beer there and added honey. For a week I caught a little more than 20 hornets, and today there are 2 more. ”

When traps are better than other ways of fighting

The trap for wasps and hornets is ideal for catching insects in areas where there is no nest. The explanation for this fact is simple - if the hornets from the garden or garden will not return to their homes due to falling into the trap, after a few weeks they will stop visiting this place altogether. 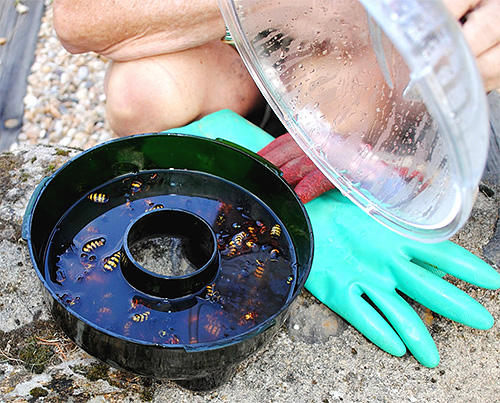 But to catch the hornet in the apiary - the task is already more difficult, because the lure for it can attract and bees. In addition, the hives themselves are a more desirable object for these predators than the usual honey bait.

To protect the apiary, it makes sense to start by finding the location itself. hornets nests and hang a trap directly beside it. With proper observation, it is easy enough to determine where the hornet lives - as a rule, this insect lodges in tree stands not far from agricultural lands, therefore their nest can be found sometimes in just one tour. 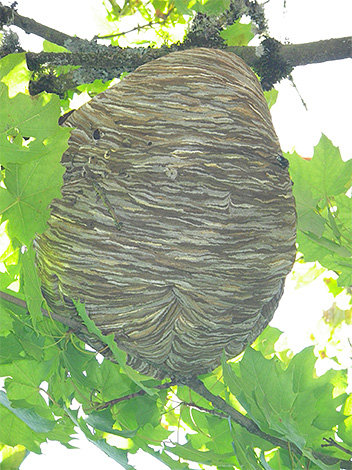 “I once drove hornets out of the lot due to my youth and looked for their nests. An interesting process, but tedious. Find the hornet, catch, tag, track ... But it works for sure. Now I only hang traps near their evidence, but right away, since April. Result: the hornets never touch the apiary. But they are caught regularly until the end of summer, and a lot. ”

In addition, a trap for wasps and hornets can be used in all situations where there is no haste in breeding these insects. For example, it makes sense to fight with wasps in the period when the summer cottage is not visited.In this case, the trap can be hung here and left for a few weeks, and during the next visit you can just throw out the caught insects. 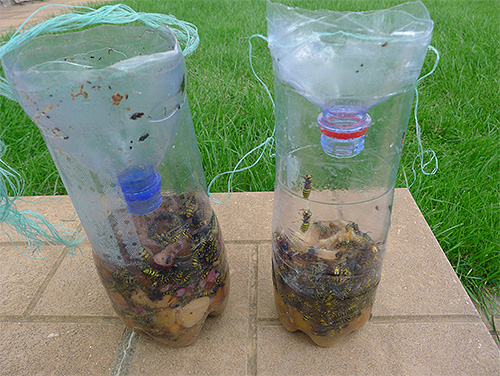 However, there are situations when you need to catch the hornets and wasps quickly and immediately: they can interfere with the work required at the dacha or openly harm the apiary. In this situation, their homes should be destroyed as soon as possible. To do this, in the dark it is necessary to remove the nest itself and put it in a bucket with a cloth dampened with liquid ammonia. The second extermination option is to simply treat the removed nest with insecticidal preparations.

Nevertheless, in spite of seemingly uncomplicated ways of dealing with hornets, there have been cases in which, in order to destroy the nests of these insects, it was necessary to call the Ministry of Emergency Situations. Fortunately, such situations are quite rare, and in the fight against wasps and hornets you can in most cases get by with traps.

How and from what to make a trap

The simplest, but no less effective traps for wasps and hornets are made from scrap materials.

Let's see what and how exactly can be used for these purposes: 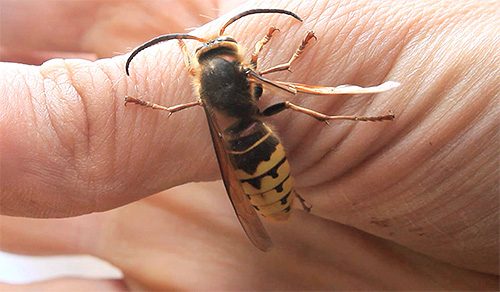 Finally, for those who cannot, for whatever reason, make a trap for wasps and hornets on their own or doubt the success of a business, today there are a number of special factory-made devices for sale that allow you to catch insects without much time and effort. It is only important to use these traps correctly.

How to attract hornets and wasps

Wasps and hornets can be attracted by a large number of products from fruits to spoiled fish. Practice shows that the most attractive lures for them are:

Of course, in each particular case, it is necessary to use the bait that will not disturb the atmosphere of the place.For example, even wasps that would never have visited the site would fly to the fish, but it’s not very pleasant for a person to be near such a lure.

When and how to catch pests

The best time to place traps is spring, since during this period, only young uterus and the first individuals of the new brood fly. If you catch these hornets and wasps, the family to which they belong will die.

Catching wasps at the end of the summer is usually not the most effective, although there are a lot of insects at this time and they are very annoying. This is explained by the fact that the use of any means of capturing, even the most perfect, does not guarantee a person to capture all members of a huge family. At this time, the traps will only work as a limiter on the number of hornets and wasps in the area. 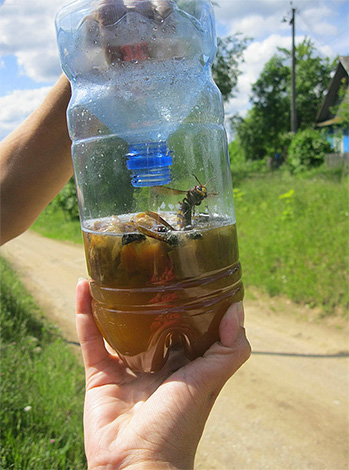 “In the spring I surround the whole apiary with traps of hornets. I usually make them from bottles, and as a bait I use beer with sugar. I tried import traps, but the result is the same, only they are several times more expensive. Until June, they come across hornets, then cease. And that's all, not once have I had any evidence. ”

Another important advantage of placing a trap on a plot in the spring is that it will not allow insects to settle here initially.The wasps and hornets first fly into it to feed, but they can't fly back.

So, the hornet or wasp is already caught, but, nevertheless, they remain dangerous until the very death. Contact with the trap, without fear of being stung, is possible only if the insects are dead. If the wasps or hornets are still crawling, it is enough to sprinkle on them with any means to remove cockroaches, and only then, after verifying the death of the insects, proceed to emptying the trap.

Extreme care must be taken when placing and checking traps located in close proximity to the nests of insects. Here hornets can attack if they consider that a person threatens their nest. That is why you should not place a trap closer than 20 m to the dwelling of insects, since at such a distance, the wasps easily smell the bait smell, but they will not be attacked by the person placing it.

“Our neighbor is one with such horns fondness. Bottles put some buckets. Once the hornet as a vsandal to his neck, the ambulance hardly managed to take him to intensive care. My wife could not stand it and called the Ministry of Emergency Situations.The guys arrived, with jokes, jokes smashed all the trash in the attic in the barn with him, put the nest from under the roof into a bucket and poured bleach. So they brought it out. ”

With all the seriousness of the situation with hornets and wasps, settling in the immediate vicinity of human habitation, you need to remember the most important thing - when catching these insects you should not get carried away and destroy them simply because they exist. In our country, the hornet is an insect with a steadily shrinking range recorded in some regional Red Books. 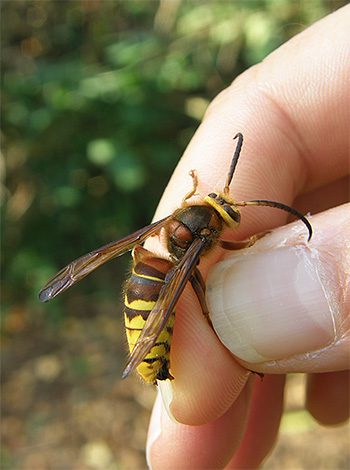 So, to destroy these insects should be only when they really interfere with economic activities and pose a danger to humans. In other situations, hornets and wasps are excellent assistants to gardeners and gardeners in the fight against pests. So work and live in harmony with nature.

Making a trap for wasps and hornets with your own hands

It is also useful to read: Photos of hornets and a description of the interesting features of their lives
See also:
To the entry "Traps for hornets and wasps: making their own hands and the rules of use" 2 comments